Directors have made considerable contributions over the years. Under the direction of Dr. John Dennison, the Aeolians performed at the Kennedy Center in Washington, DC, receiving flattering reviews. Under the direction of Dr. Alma M. Blackmon which began in 1973, the group was propelled into national and international prominence with the performance of over 200 concerts in the United States, Bermuda, the Bahamas, the Virgin Islands, Canada, Poland, Romania, and Great Britain. Under the current director, the group tours extensively, and has extended their international prominence to Trinidad & Tobago, Russia, and Jamaica.

Aeolian performances present a repertoire of choral music which ranges from the Baroque era to the twenty-first century. They have become an authoritative exponent of Negro spirituals and Work songs which express the yearnings of their forefathers to be free.

Under the God-inspired direction of Jason Max Ferdinand, the choir has placed 1st two years in a row (2010 & 2011) in the iSing HBCU Challenge hosted by Reid Temple AME Church in Lanham, Maryland, and being named in 2014 as the four-peat national HBCU choral champions. They have also been presented with the keys to the City of Huntsville with Dec. 3rd & Dec. 5th being days named in their honor.

A stellar 2011 – 2012 season saw the Aeolians visiting Moscow, Russia as part of the Russia-US Bilateral Presidential Commission on development of cooperation between Dmitry Medvedev and Barack Obama and competed at the 7th World Choir Games held in

Cincinnati, USA, where they earned gold medals in all three categories of entrance and the overall championship for the Spiritual category.

Since January 2013, the Aeolians have teamed up with the Alabama Symphony Orchestra (ASO) to present an annual Martin Luther King Jr (MLK) tribute at the Alys Stephens Performing Arts Center, Birmingham, Alabama. This collaboration has seen masterpieces performed from the symphonic choral literature to include Brahms, Mozart, Schoenburg, Dvorak, Hailstork & Dett just to name a few. In 2016, it featured Beethoven’s “Choral Fantasy” with guest classical pianist, Nervo Altino from the Altino Bros. This choir has been truly blessed and for this they are thankful.

In everything that the Aeolians do today, service is first.  Whether it be sharing in worship during rehearsal, or ministering at church; whether it be competing in a world class competition or embracing little children on the mission field, the Aeolians are there to answer the call and to, “Do the will of my Father who sent me!”  Many lives have been touched all over the world by what this choir has done for the last 70 yrs.  To God be the Glory!!! 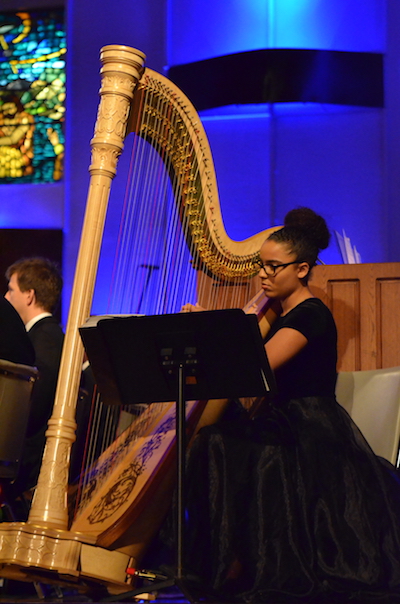 As we celebrate this Platinum Jubilee, the Music Department will have events leading up to the Aeolians’ penultimate celebration at 2017 Annual Homecoming Concert.  You will not want to miss the Event of Events.  Make plans now to be there!

We want to give you the opportunity to be a part of the celebration.  Our commemorative booklet will chronicle the years, the directors, and the different eras.  We know that you would like to send your congratulatory message to Aeolians, to your director, and to your era.   We would love to see your message in this Platinum Jubilee Commemorative Booklet.  Won’t you be a part of history and let us celebrate together?  You can do so by filling out and returning an Ad Form and sending in your message.  We look forward to receiving it.  Many of you follow us on social media.  Thank you for supporting us on social media.  You will also be able to access an electronic version of the Ad Form there.

We thank you all for your continued support.  Your prayers mean a lot to us.  Continue to pray that we remain humble and allow the Lord to use us in His service.

Get Inspired. See the Difference.

ENTER TO LEARN.  DEPART TO SERVE.

Welcome to the Office of Institutional Effectiveness (IE)! Our mission is to promote and support informed decision-making and continuous quality enhancement at Oakwood University.
We achieve our purpose by promoting exemplary Christian education and continuous improvement of programs and services. In an environment demanding increased accountability and responsiveness, IE accomplishes the following:

Choose from the following areas:

The Commission is to be contacted only if there is evidence that appears to support significant noncompliance by Oakwood University with a requirement or standard.

Denominational Accreditation
Oakwood University is accredited by the Adventist Accrediting Association of the Department of Education of the General Conference of Seventh-day Adventists.

Accreditation documents may be viewed in the office of the Vice President for Academic Administration.

Equal Opportunity Commitment
Oakwood University is committed to providing equal opportunity for all qualified persons. It does not discriminate on the basis of race, color, national or ethnic origin, gender, marital status, or handicap in the administration of its educational and admissions policies, financial affairs, employment policies and programs, student life and services, or any other college-administered program.

The document posted below is an update of the work of the Oakwood University Strategic Planning Committee.  We welcome feedback from interested stakeholders regarding this document.  Please take advantage of this opportunity to review and comment on the work of the committee.  Thank you for your participation.

The Oakwood University Strategic Planning Committee is in the process of preparing a new strategic plan. It is important for the committee to have input from all of its stakeholders. This website has been developed for two purposes: first, to provide information to constituents about progress in the strategic planning process and second, to solicit feedback from constituents regarding the information provided. As the committee makes progress, documents will be posted here for review and discussion.

Introduction
An institution's strategic plan projects its character and image. It communicates its mission, goals, and objectives. It is the organization's blueprint for utilizing its skills and resources, directing its routine operations, and achieving its dreams and aspirations. It is its portrayal of its future, organized by distinct, determined actions for achieving a specified set of outcomes in keeping with the mission of the institution.

Purpose of the Oakwood University Strategic Plan
The purpose of this strategic plan is to unite all of the institution's component parts around a set of common goals and institutional priorities. It is designed to serve as a linking device to connect the various categories of decision-making and action within the institution. It is also structured to encourage integration and collaboration among campus entities.