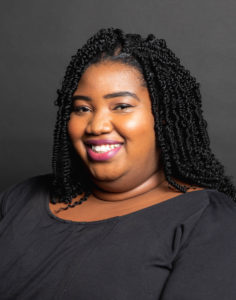 Paulette Gates, a successful media professional, is an aluma of Oakwood University where she earned a Bachelor of Arts degree in Communication with a minor in Theology. Immediately following graduation, Paulette was hired to serve in the Communication Department as a media lab assistant. She used her skills during her time there working as a camera operator, technical director, and producer of the Oakwood University Church. Alongside, she was honored to work as a camera operator and production assistant for Breath of Life Telecast. Paulette continued using her skills by being a production assistant, producer, editor, camera operator, technical director, and production manager for numerous companies and networks such as KickPhase Studios, P-Gates Productions, Manders’ Global, ABC, NBC, OUBN, 3ABN, and Dare2Dream.

Paulette’s heart for media, ministry and mentorship was the foundation that shaped the latter part of her career when she began an assignment serving as the Director of the South Central Conference of SDA Media Camp. The camp is a weeklong summer program that gives a crash course in the production process while sharing Christian principles and values to youth today. This camp has been successful in inspiring middle and high school students to study communication not only at Oakwood University, but other HBCUs alike.

Paulette spent several years working in the film and TV industry, but returned to academics after completing her Master of Arts in Film and Television from Regent University. She now enjoys a career in academia by serving as an Assistant Professor of Communication and the Program Coordinator for Film and Television Production at Oakwood University.

Aside from working as a professor and media professional, Paulette plans to share her experience by developing a mentorship program in Film and TV for high school youth. “Success is not so much about you, but about how many people are better off because you lived.” -Bill Britt